making my own acquaintance 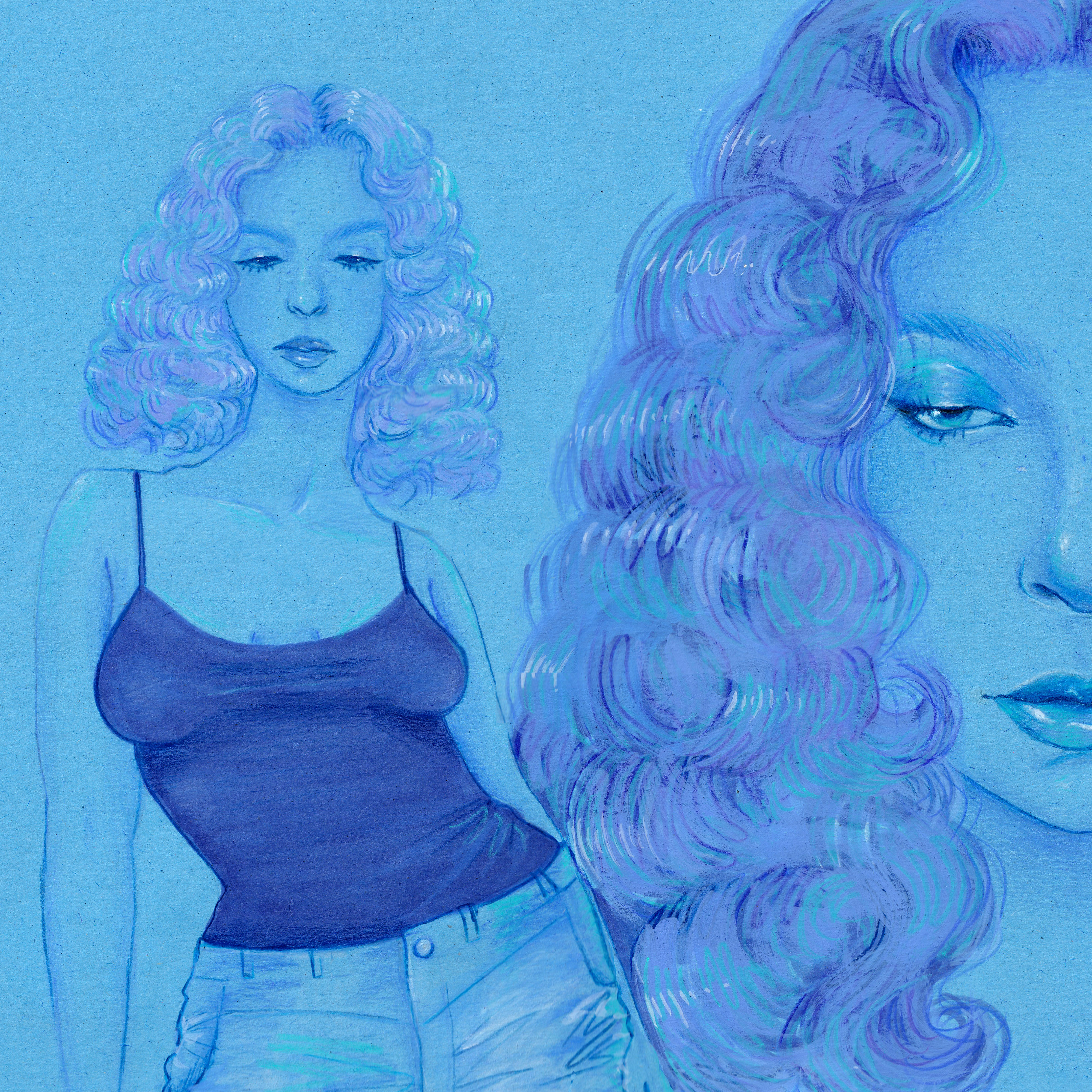 I created this self-portrait in September, 2020. I was so pleased with the result that I decided to show my grandmother, likely fishing for a compliment from one of my favourite people.
‍
She said “Oh that’s nice, but is it supposed to be you?"
I said “yes, it’s a self-portrait”, and she replied:
‍“Oh… But that doesn’t look like you”‍
I was so offended that her comment stayed in the back of my mind and never left. If I had just been honest with myself I would have realized she was right, and perhaps it bothered me so much because deep down I knew she was right. Looking back on that drawing now, I can easily recall each time I consciously decided to misrepresent my features— Slimming down my body and face, plumping my lips, smoothing my hair, and evening out my eyes to create symmetry where it didn’t exist. While working, each small touch up seems inconsequential until you're faced with a bastardized final product and a totally different person looking back at you.
‍
If the purpose of creating a self-portrait was to depict myself, then why did I disfigure my own face beyond recognition? And why did I not think twice about it at the time?

Idealization of the human form in the arts is no new phenomenon. Far beyond simply omitting imperfections, affectation in art has been used as a politically and socially strategic tool since the beginning of civilization. From political propaganda to Sears Photo Studio portraits, images of human beings have almost always been deliberately composed to control the viewer’s perception of the subject. Somehow, despite humanity’s long history of idealizing our own images, this phenomenon tends to be discussed today as a symptom of Barbie dolls, Photoshop and Instagram filters.
‍
The Mesopotamians portrayed their kings as giants in their artwork, towering over their servants ₁. Hatshepsut, a female Ancient Egyptian Pharaoh commissioned hundreds of artworks of herself, portrayed in the masculine ideals of kingship to assert her legitimacy in the position ₂. classical Ancient Roman portraiture never captured an individual likeness, always depicting the subject within cultural ideals of beauty instead ₃. From the 15th century and beyond in Europe and colonial America, it was common practice among the upper classes to commission a portrait of oneself as a way to immortalize their likeness beyond death and to show off until then ₄. Of course, these portraits would be carefully composed to exaggerate the sitter’s wealth and portray their appearance in an idealized manner (You’re not paying all that money to be painted with a crooked nose and eye bags, right?).
‍
The realm of self-portraiture is no different, and artists have been putting their own best foot forward in their work for hundreds of years ₅. Male artists have historically had the professional liberty of portraying themselves in especially colourful self-portraits: groping their hot wives, schmoozing their models, even depicting themselves as Christ, thereby being revered for one of the most famous self portraits in Western art. In the male-dominated art world, female artists have historically faced unfair scrutiny of their work, and there is a long and fascinating history of female artists using strategic self-portraiture to earn the respect they deserved ₅. For some, like Elisabeth Louise Vigée Le Brun, it took scathing reviews and the harsh dismissal of one of her earlier self-portraits, a pretty, straightforward depiction of herself, as vain to realize she needed to pivot towards a different approach to the genre. From then on, she typically depicted herself as a capable professional with a palette and brushes in-hand, or working away at an easel ₆. As both the artist and the subject, female self-portrait artists continue to grapple with the precedent of depictions of women in the arts. Particularly in the works of male artists, female subjects are often dehumanized as simple, aesthetically pleasing visual elements, devoid of personality, individuality or agency ₇. I experienced this dilemma in creating that first self-portrait without even realizing it. My instinct was to produce a pretty picture of a girl, not a true representation of myself.
‍
Many great female self-portraitists have pushed far beyond these conventions of women as subjects. The self-portraits of women like Frida Kahlo, Loïs Mailou Jones and Jenny Saville are the inspiration for this project as I strive for honesty in my self-portraits.

who doesn't love a good
before and after? 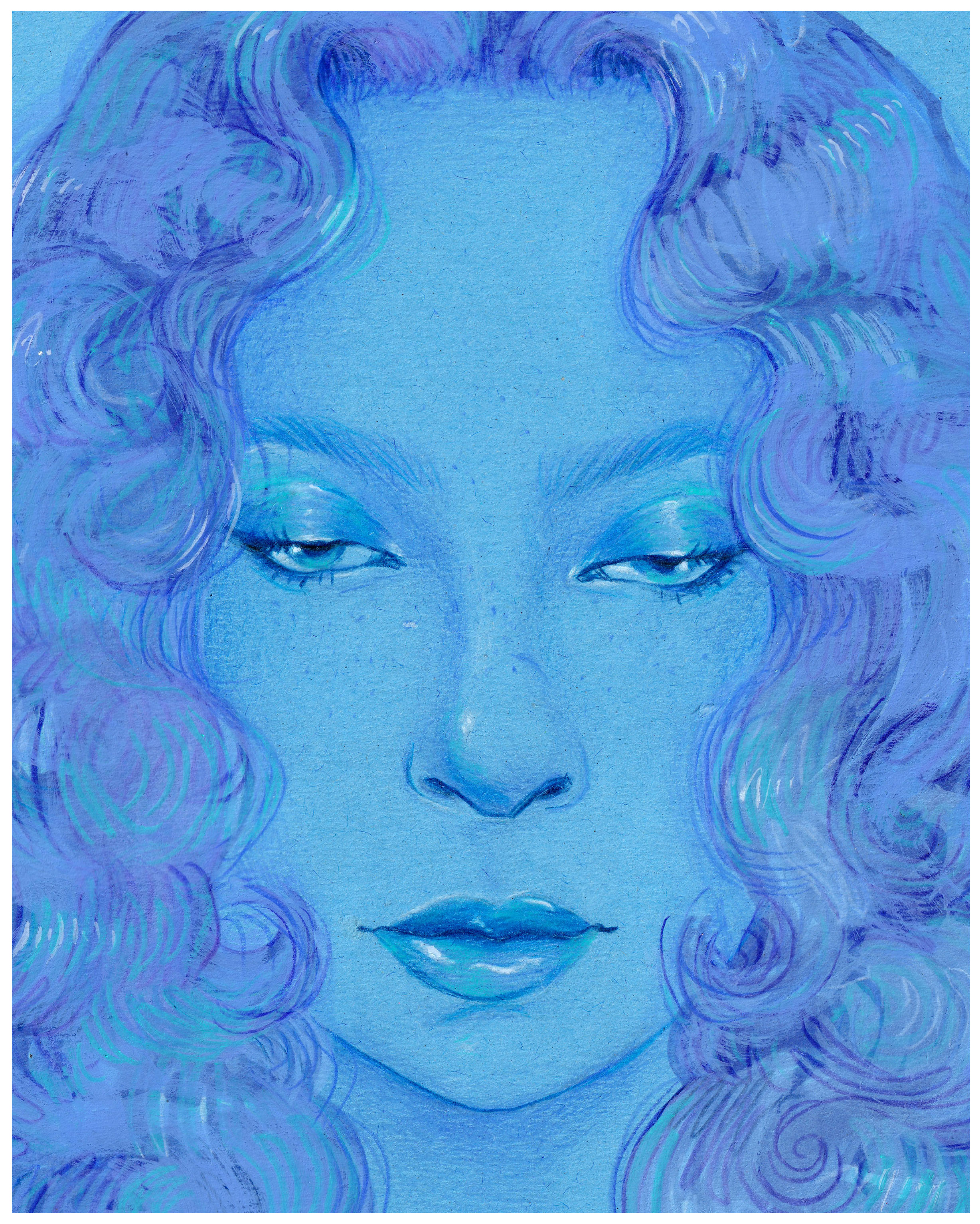 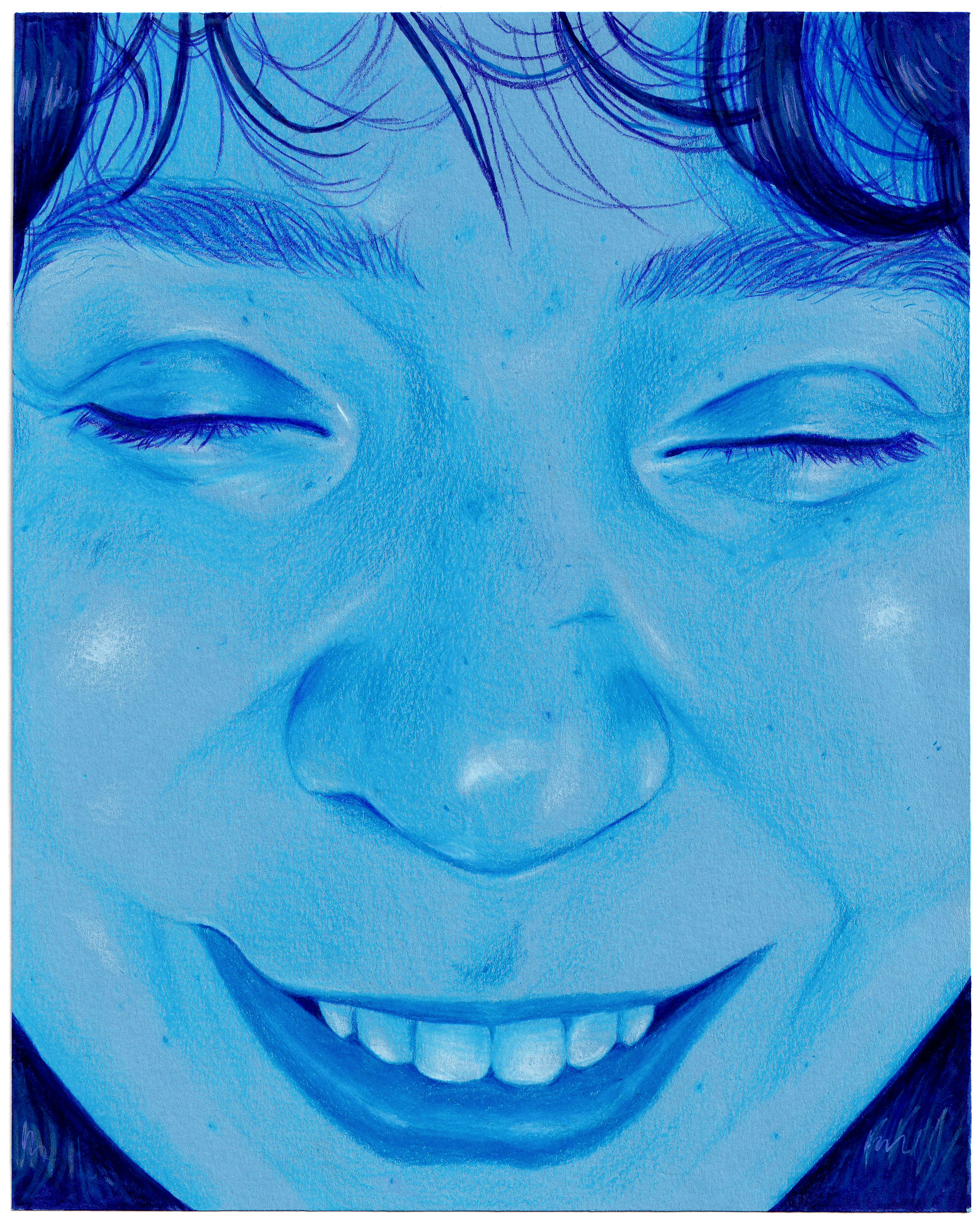 Over 6 months of work went into this before and after, and the process it took to get from that first self-portrait to my last (for now) is arguably more important than the final product itself. The process behind growth of any kind is messy, frustrating, embarrassing at times, and certainly not linear. In a world obsessed with getting results fast, it's rare to see the trial and error, anguish, and failure that took place between the extremes of before and after. By giving just as much (if not more attention) to the process work as the finals, I hope this project helps other creatives feel less discouraged by the ‘failure’ that leads to success. 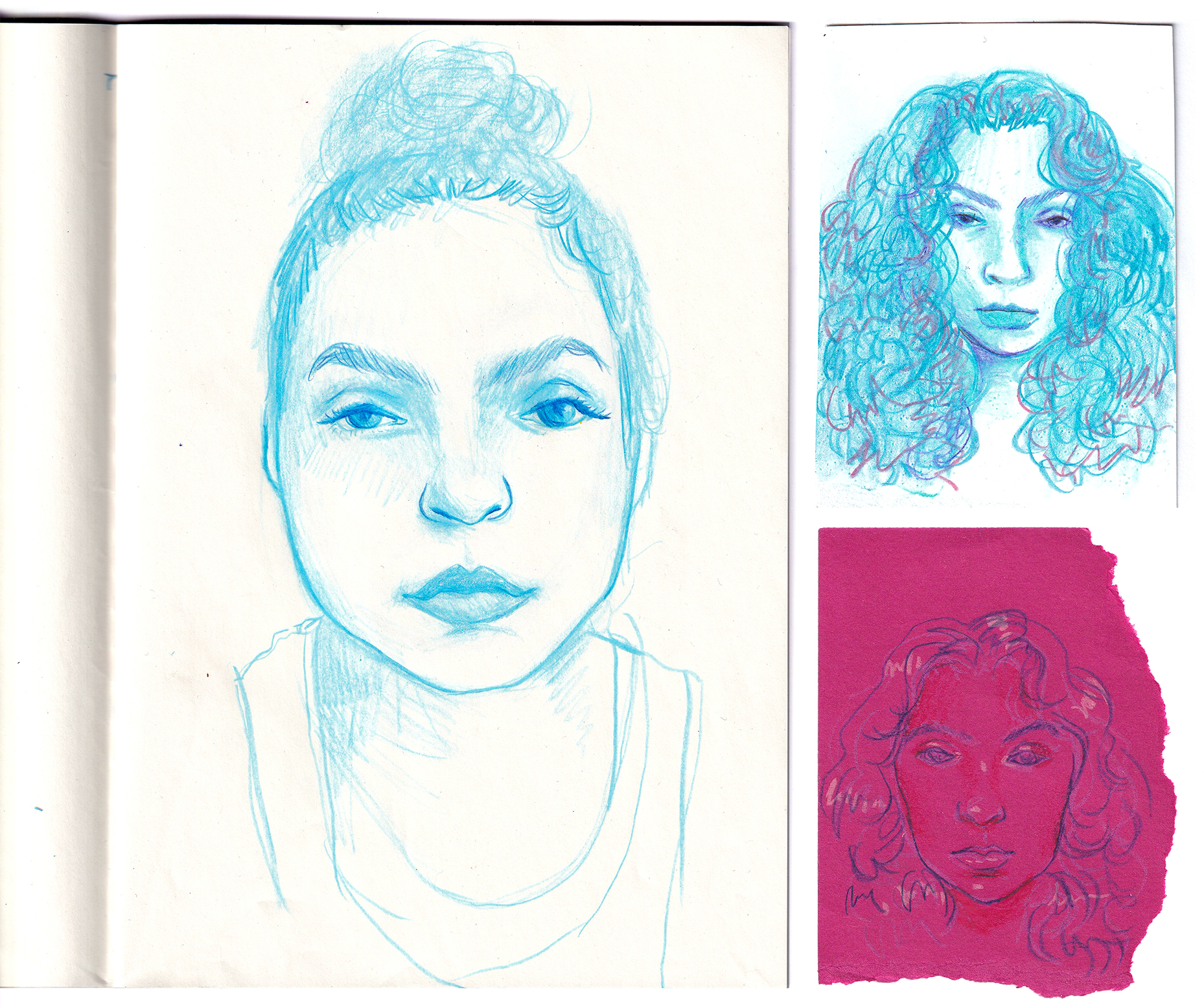 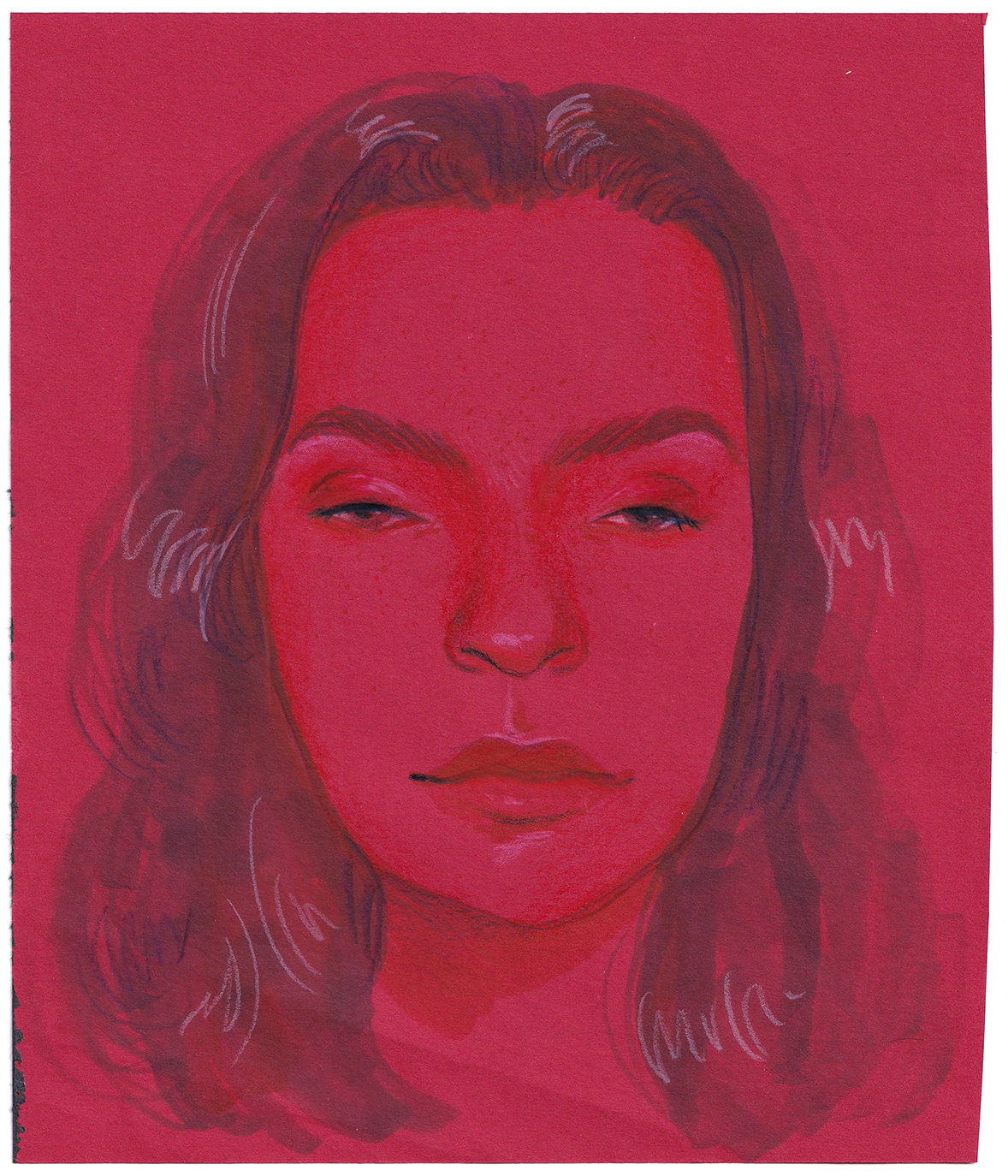 And so I set out to portray myself as I am, flaws and all, in an honest self-portrait. Armed with healthy skepticism of both mindless idealization and unrealistic beauty standards, I tried... and swiftly failed. Even with my increased mindfulness, my first few attempts did not resemble me. They were touched up and tweaked versions of me with a shadow of my likeness, but not really me. Going into this project I truly believed that somehow I would be immune to the overarching convention of idealization that has become normalized and expected in the arts. That somehow the pressures to be flawlessly beautiful that affect nearly all women would not affect me. Needless to say the hubris of it all caught up with me quickly.

i had no clue what i was
getting myself into

I hadn’t considered that it would take unlearning and confronting my deepest insecurities to honestly portray my own appearance. I had no clue what I was getting myself into when I settled on the topic of self-portraiture, but before I knew it, a project about improving my artistic abilities turned into a project about my troubled relationship with myself.
‍
This initial phase of failure after failure was a great source of frustration, but a vital part of the process. I have always seen myself as a capable artist, but it was time for me to accept that the success I was looking for wouldn't be immediate. 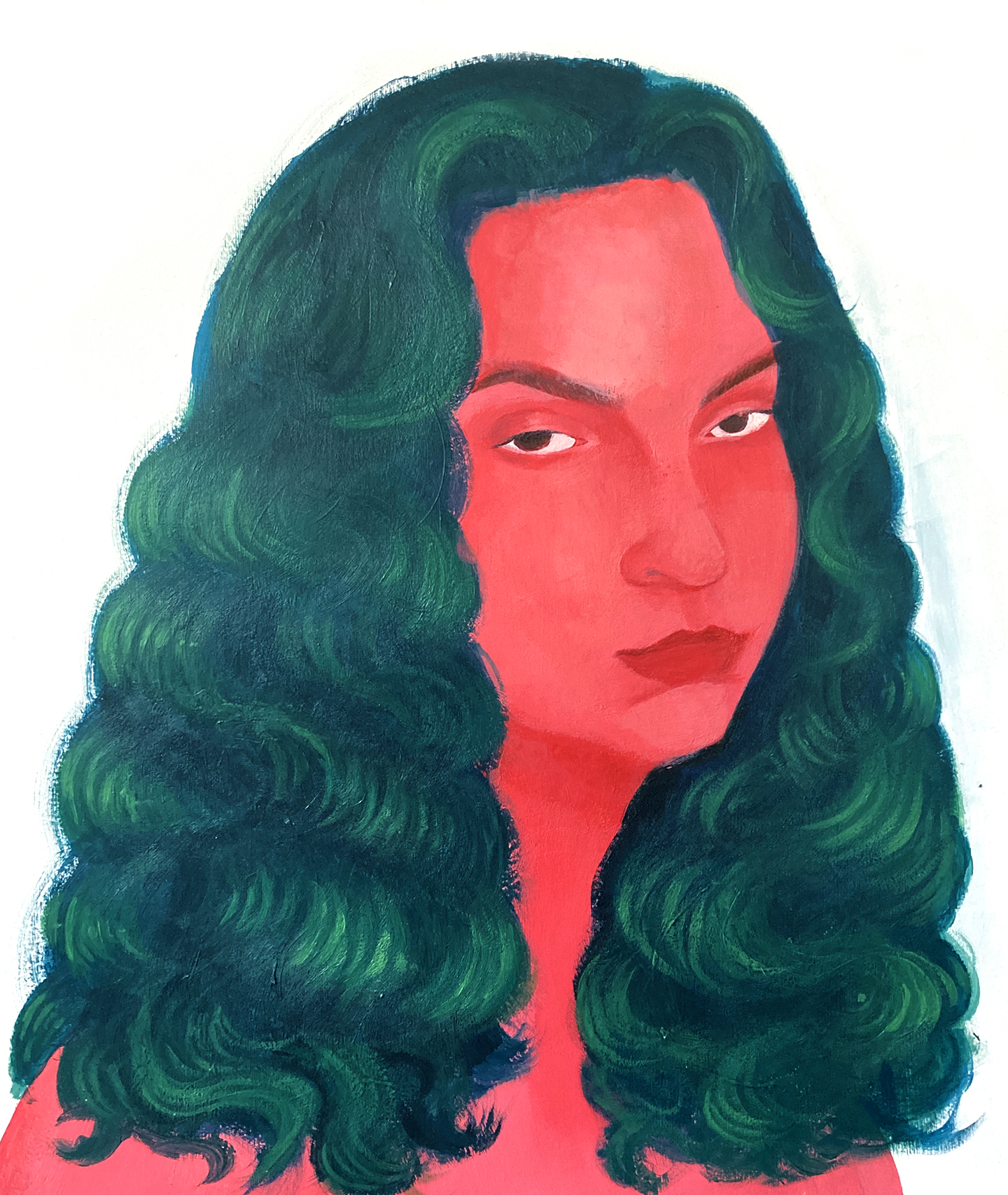 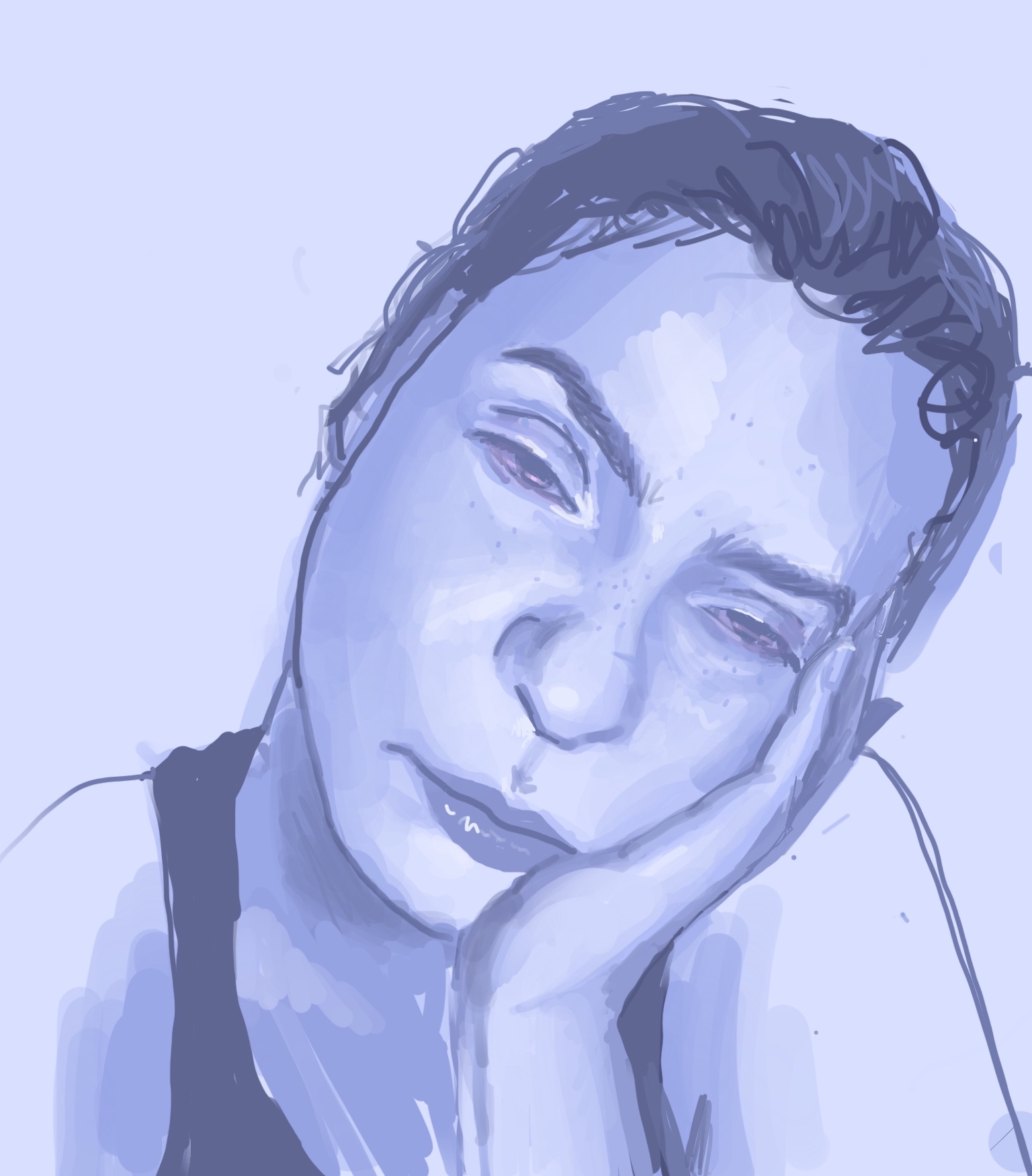 a switch is flipped

The mirror is excruciating. I found myself staring in the mirror, thinking myself ugly where I would normally just look away from my insecurity blissfully. I was already tired of looking in the mirror to draw my reflection, and I had just started. I wondered who would ever be interested in looking at my face over and over anyway? If I can barely stand it, who else would?
‍
I wanted to abandon this project altogether and take up a different area of study. Maybe I could go back to just drawing others? That would be so much more peaceful than staring at my own face for hours.
‍
Finally I had a helpful thought. Even if I walked away from this project, even if I stopped looking at myself in the mirror this way, this is still how I will look. My hated features will still be there. We can edit our photos, idealize our self-portraits, but our insecurity with our physical being remains.

I have to make my own acquaintance and find comfort in my own presence.
‍
It’s no longer just about the art, it's about my relationship with myself. 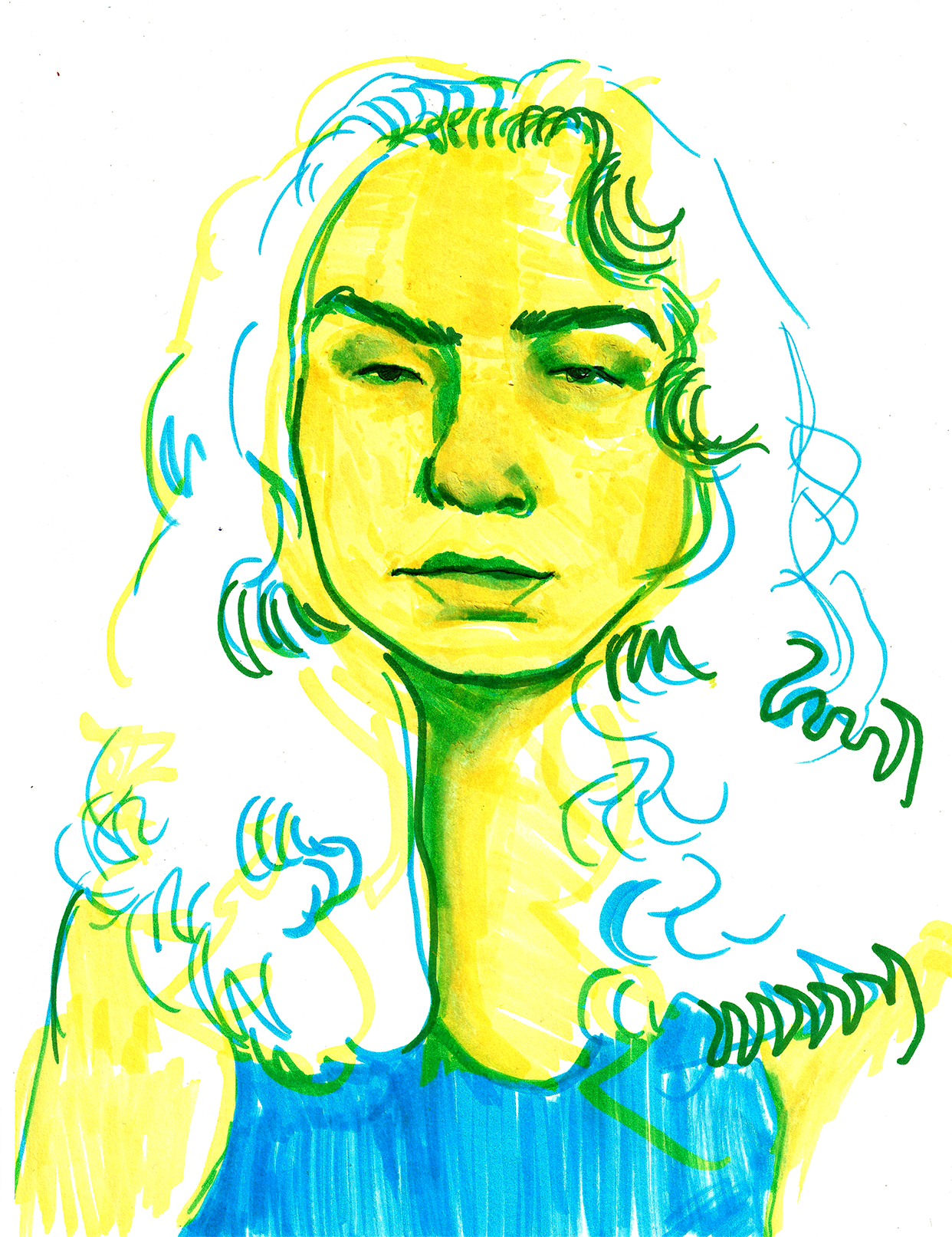 The anguish and frustration I felt in facing my insecurity and setting out to accurately capture it provides an answer to my initial question- If my aim was to create a self-portrait, why did I feel the need to change my face past the point of recognition? And why was I so delusional about it?

The answer is easy to see now. It was so much more comfortable to just gloss over my insecurities. By drawing the aspects of my face that make me cringe, I acknowledge their existence. Having a (tough but necessary) reckoning with my appearance meant reframing my perceived flaws as factual and neutral. Neither attractive nor ugly, just real. Just there.
‍
I began experimenting with my ‘ugliness’ in different mediums and styles, but I quickly ran into another mental block that hindered my success. Although I had a newfound comfort with my appearance, I did not yet have a familiarity with it. While I was quickly improving, I had a desire for excellence where I hadn’t quite nailed the basics yet. I had to find a new approach that eliminated the pressure of creating masterpieces and allowed me to play around without major commitments of time or materials. 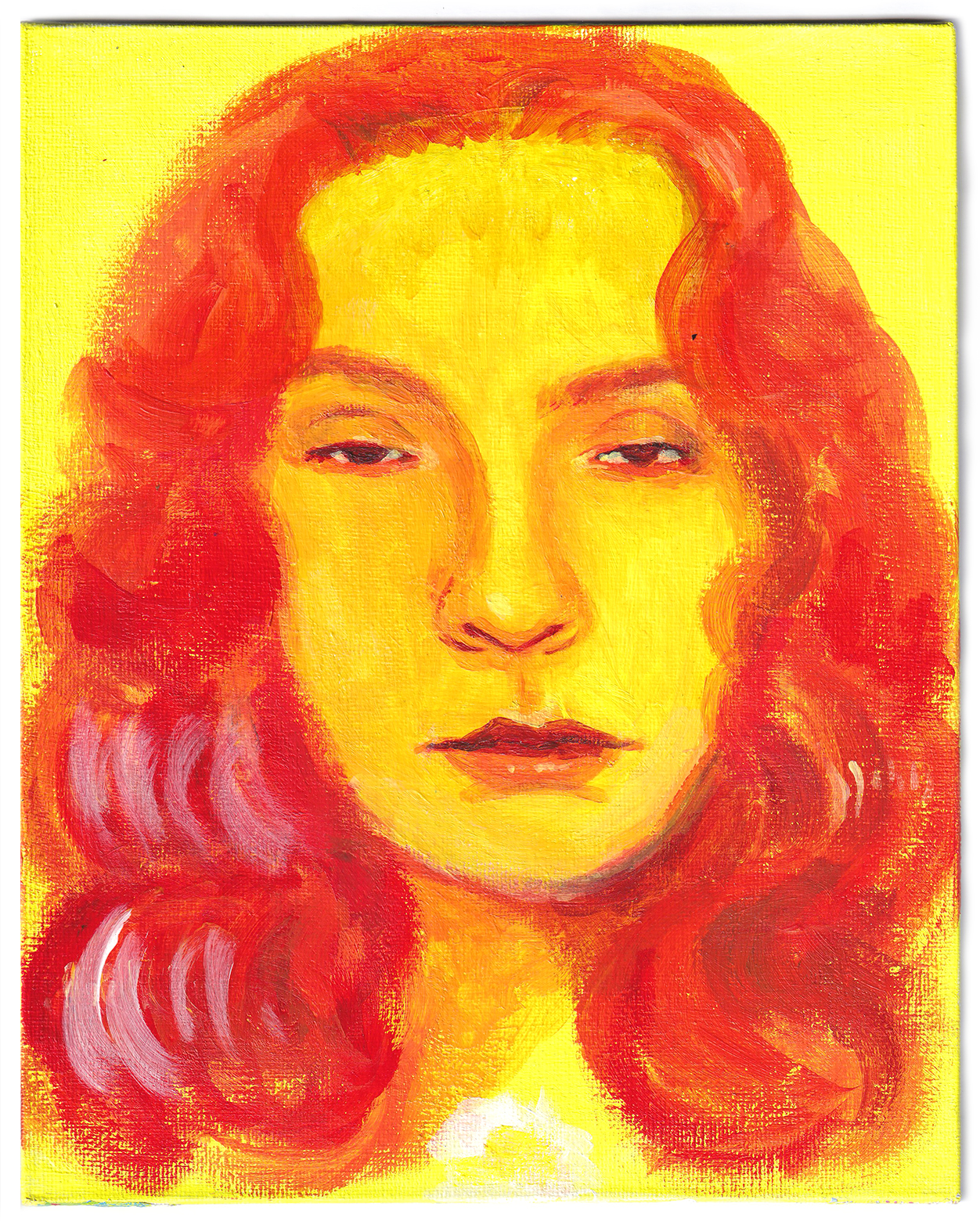 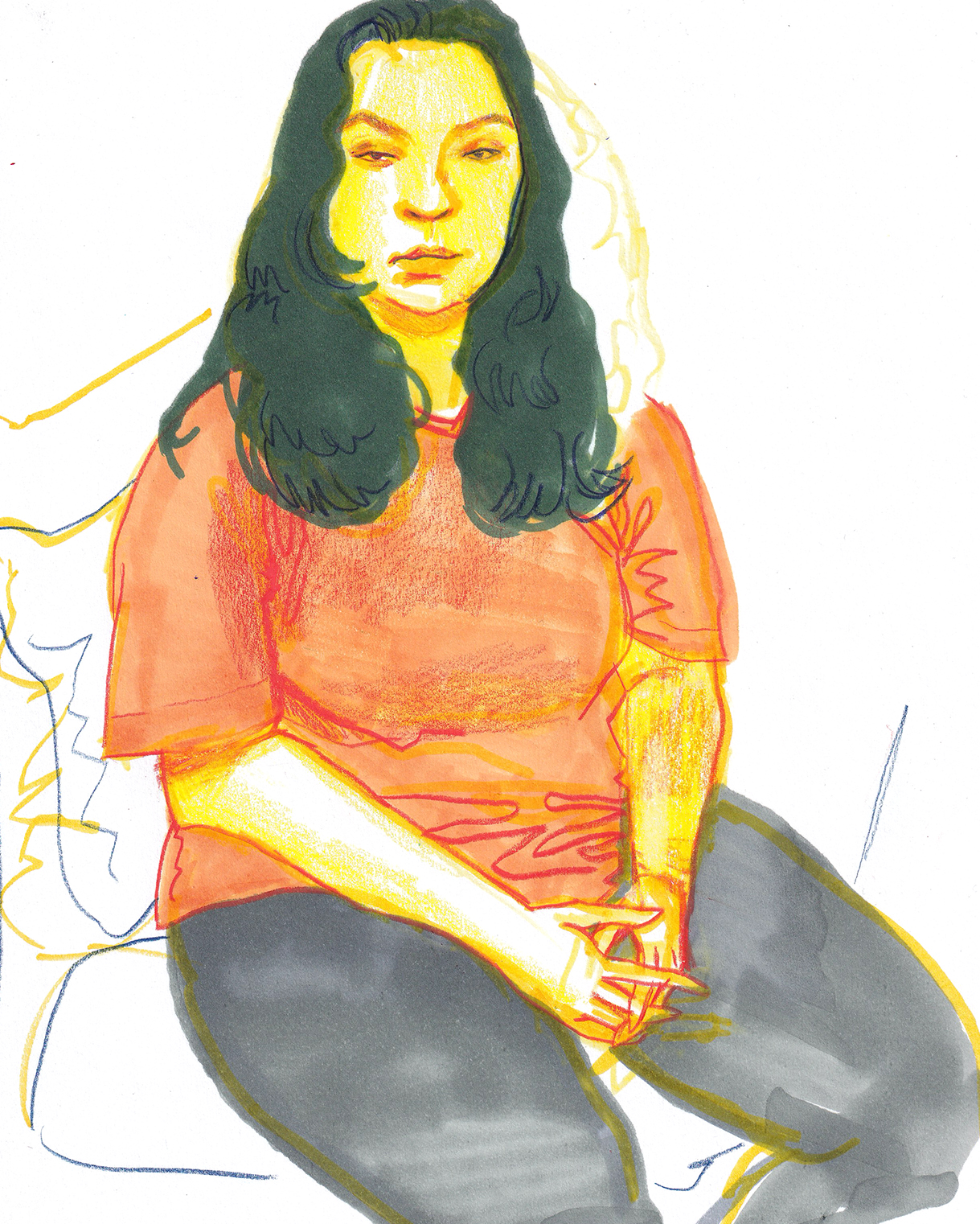 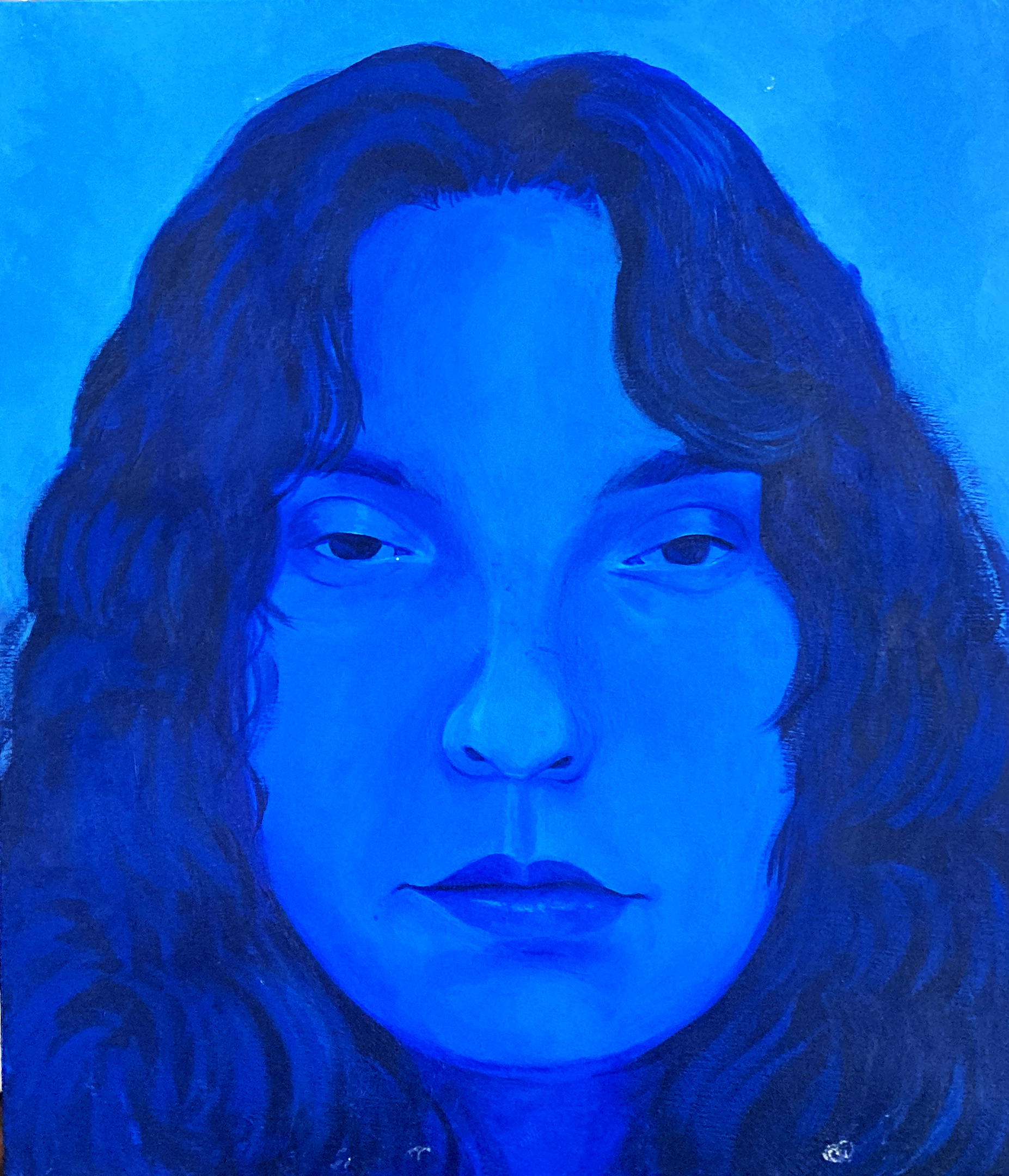 I was so eager to produce something mind-blowing that I jumped into high-commitment pieces far too soon. I poured dozens of hours into sizable paintings only to repeat the same mistakes over and over, get frustrated and then abandon them before completion. I realized I had to get all of these mistakes and bad ideas out of my system before I continued investing serious time into large pieces, especially paintings.

I came up with a way to trick myself into letting go of the obession with perfection by creating the ultimate low-commitment medium. I began ripping up pieces of whatever paper I had around. I tore up used drawing paper that still had a good side, misprints from my four years of university, and cheap construction paper. It worked like a charm, and I quickly began doodling on these scraps, exploring my facial features, and working through the success and failure without fear of being disappointed by the result. When I screwed up, I could simply pick up another scrap and start over.

Allowing myself to create work that only contributed to the process and accepting failure as an integral part of that process were major breakthroughs in this project. 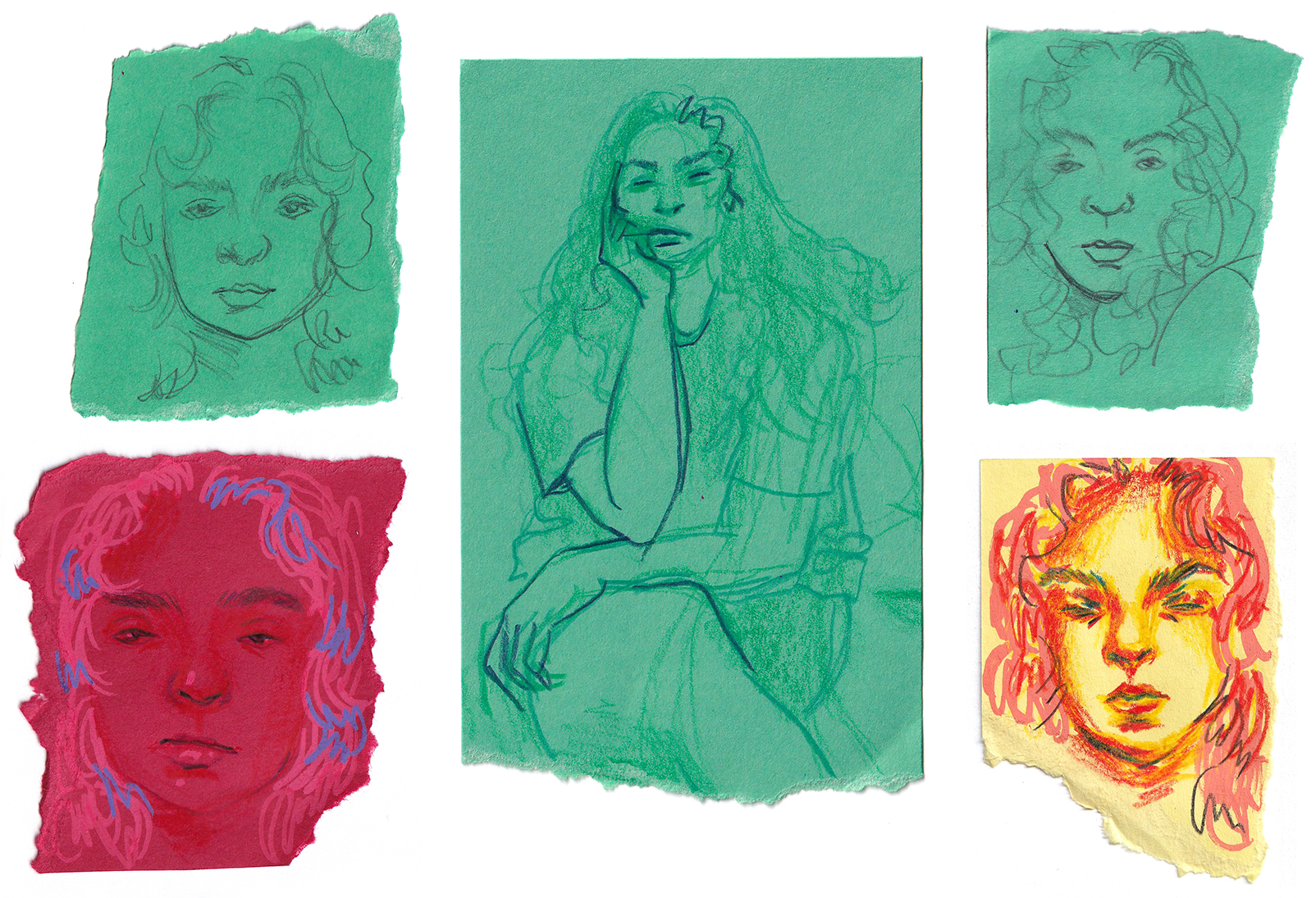 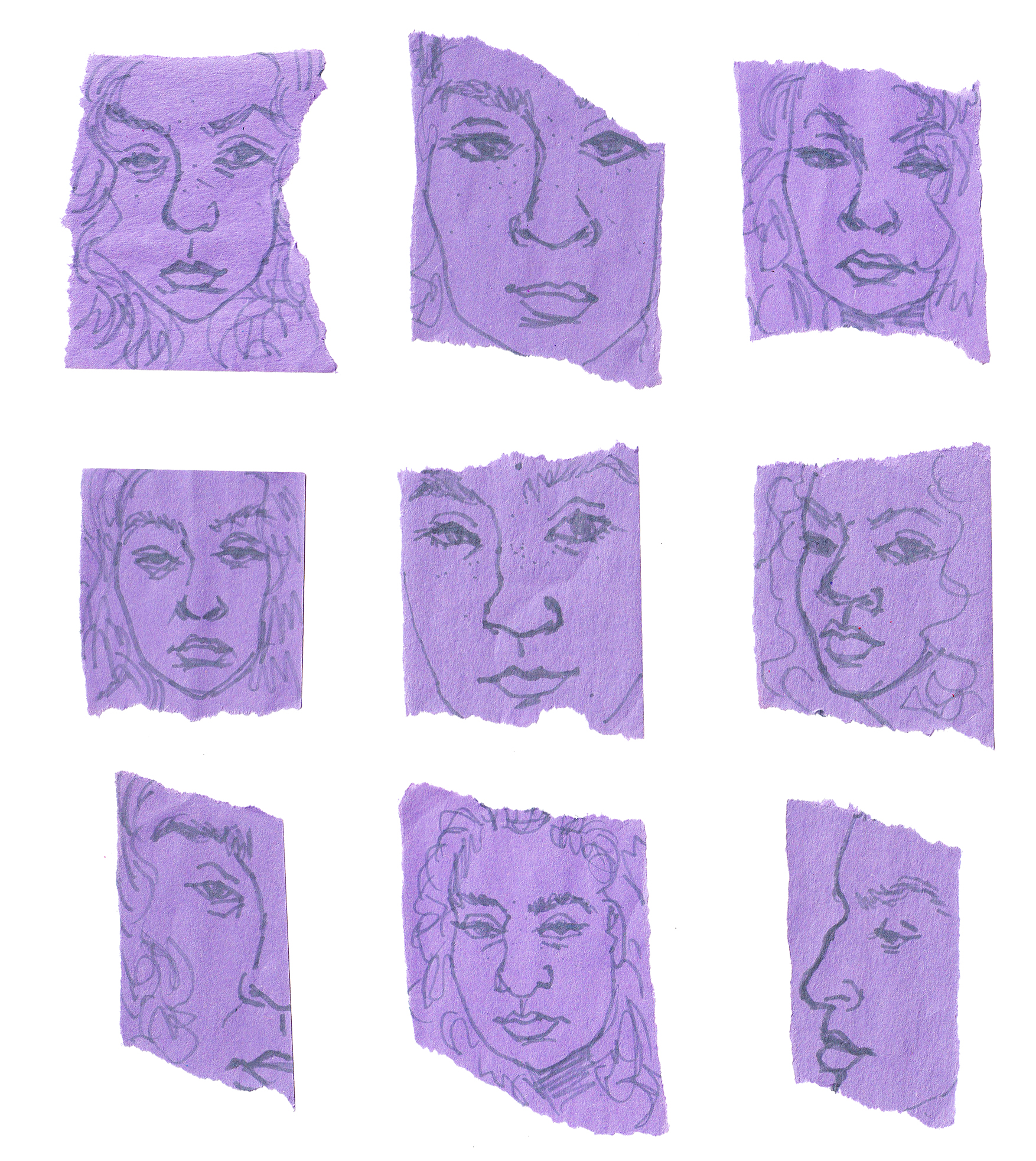 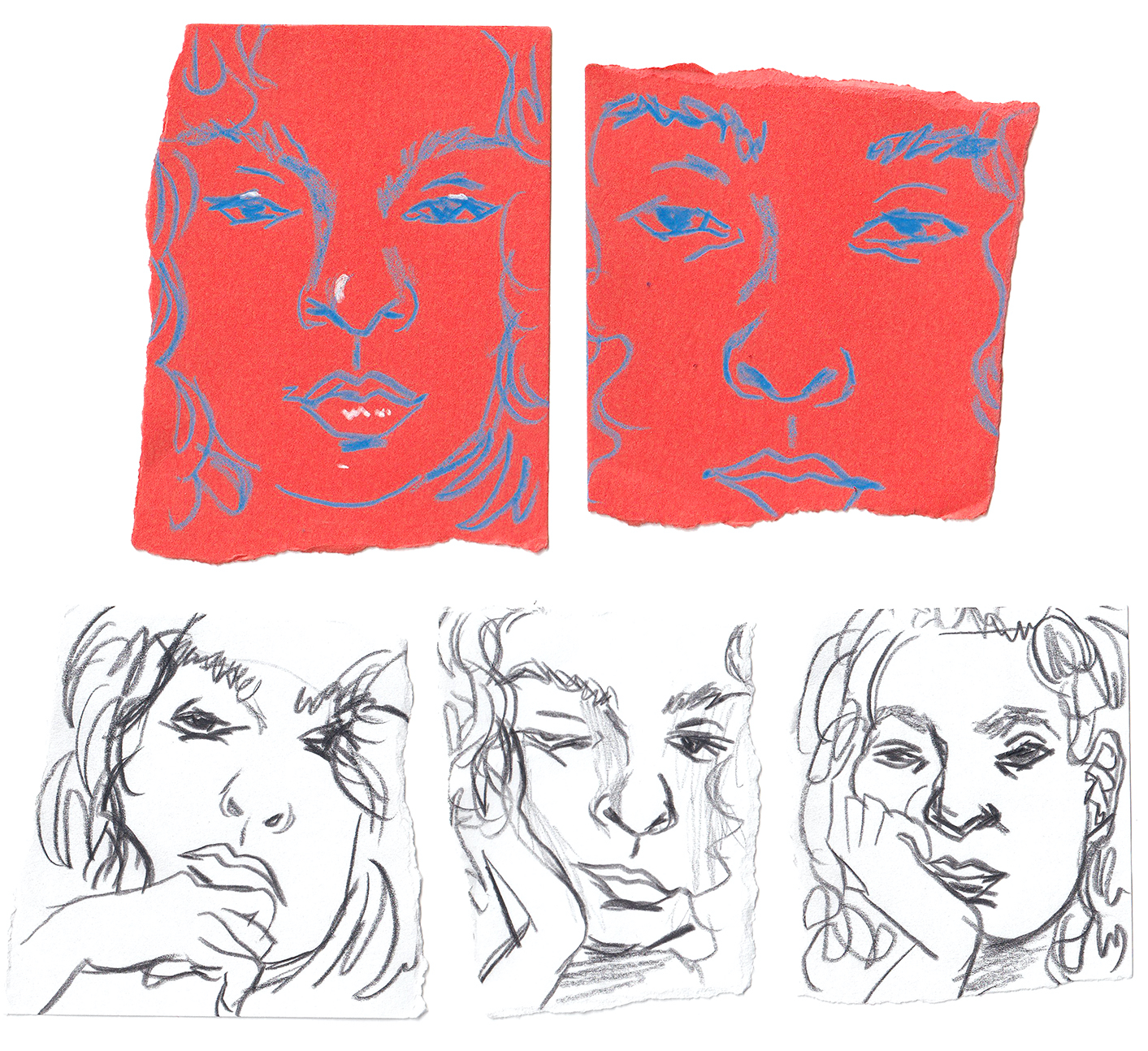 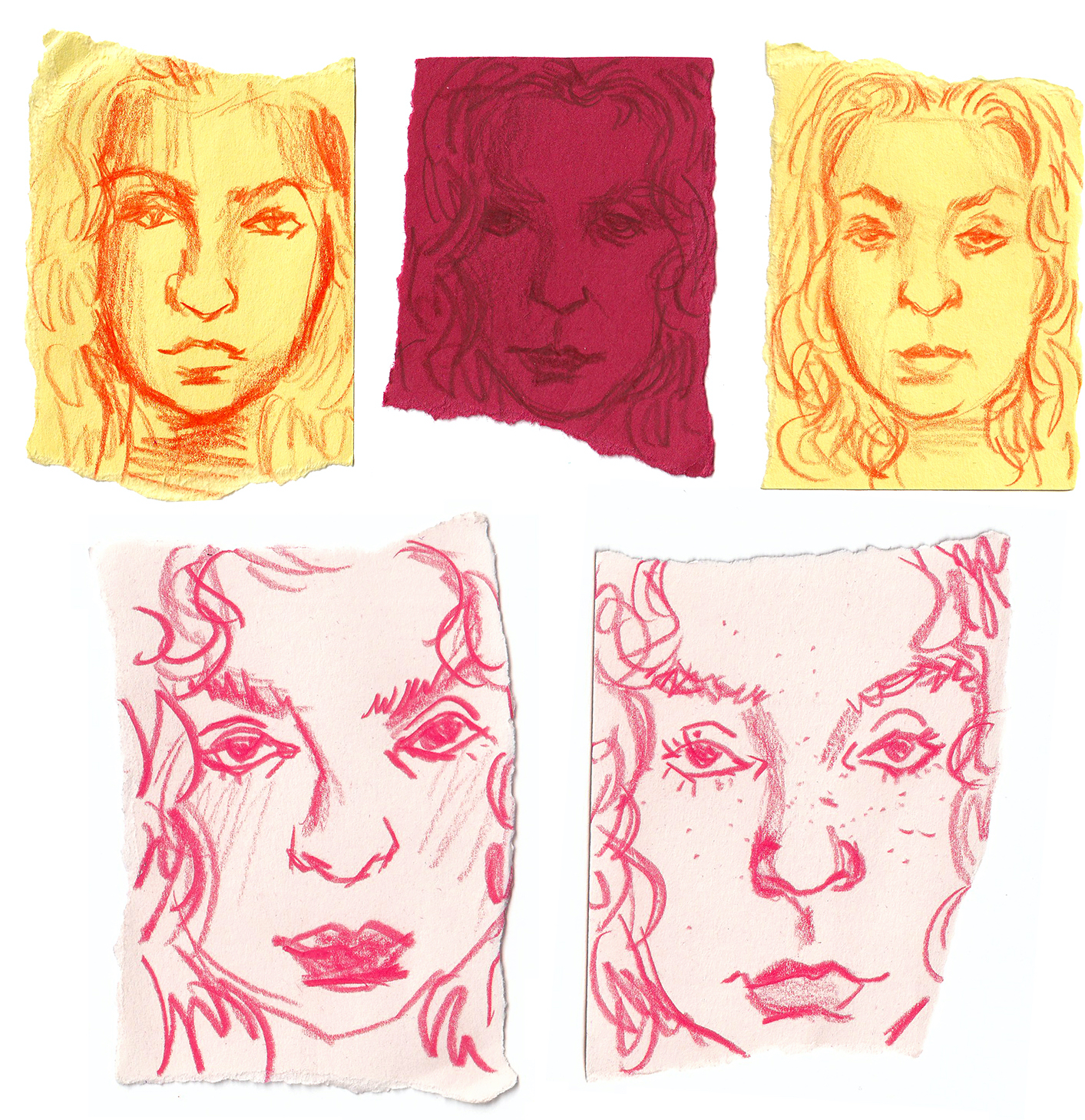 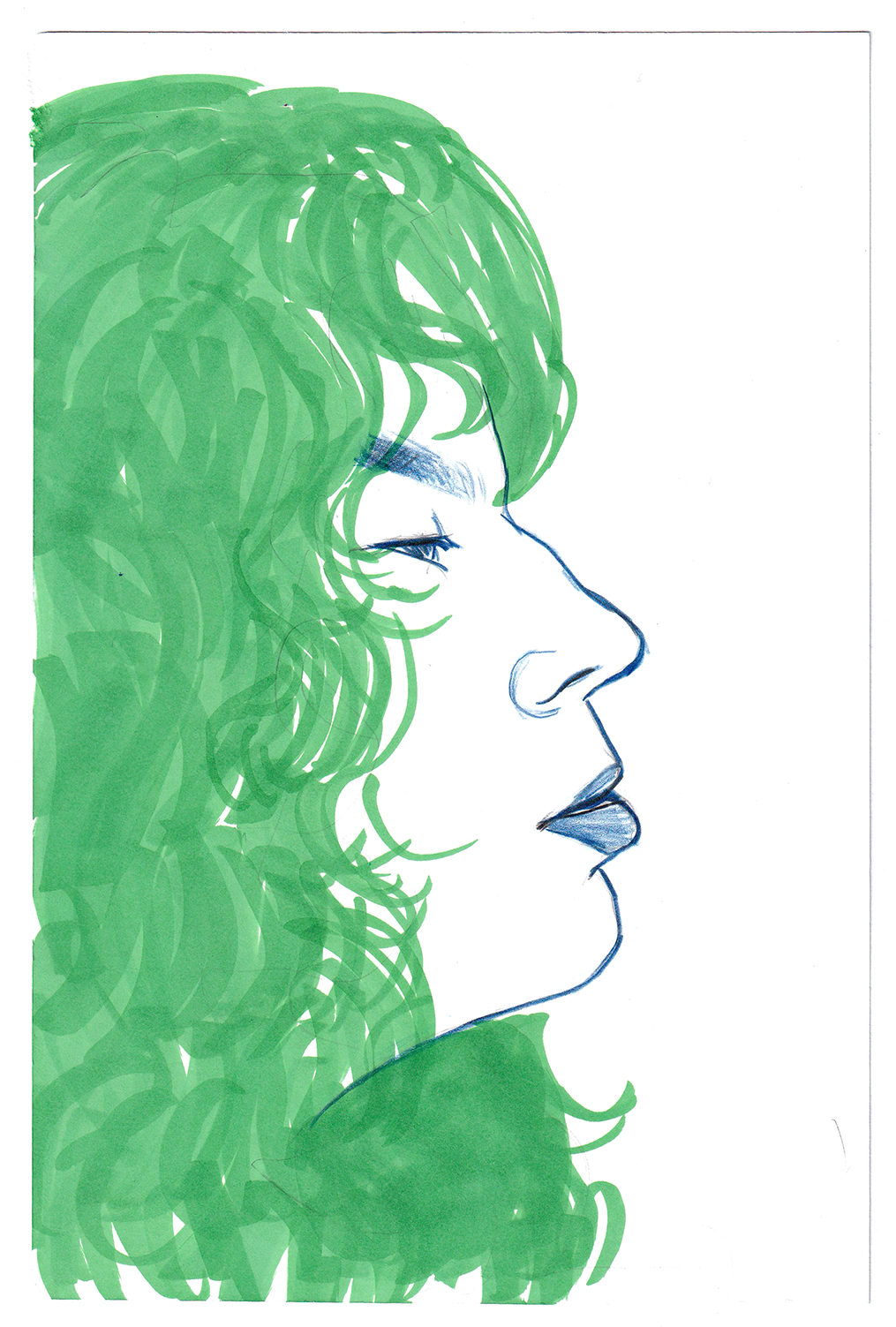 Free from the pressure of performing every single time, I fully embraced imperfection and the process became a lot more fun. The messiness of life became an inspiration and I dared to depict myself in a more vulnerable light. I learned to laugh at myself. After an anaphylactic reaction sent me to the emergency room I sketched my swollen, miserable face. I took ugly selfies and drew them. I embraced and emphasized the asymmetry of my face instead of ‘correcting it’ in my work. I stopped shying away from the unflattering shadows or highlights I had previously omitted from my drawings. 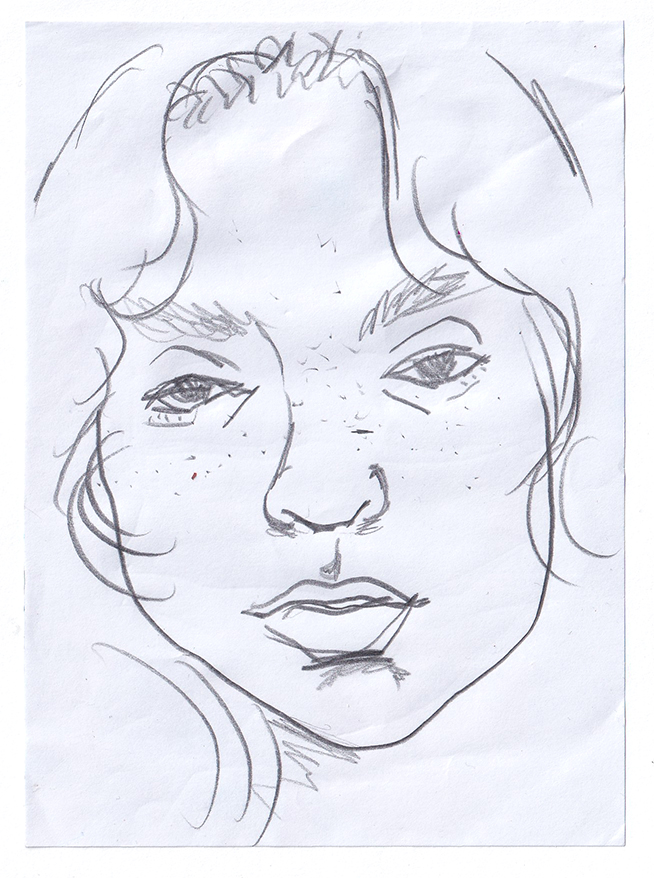 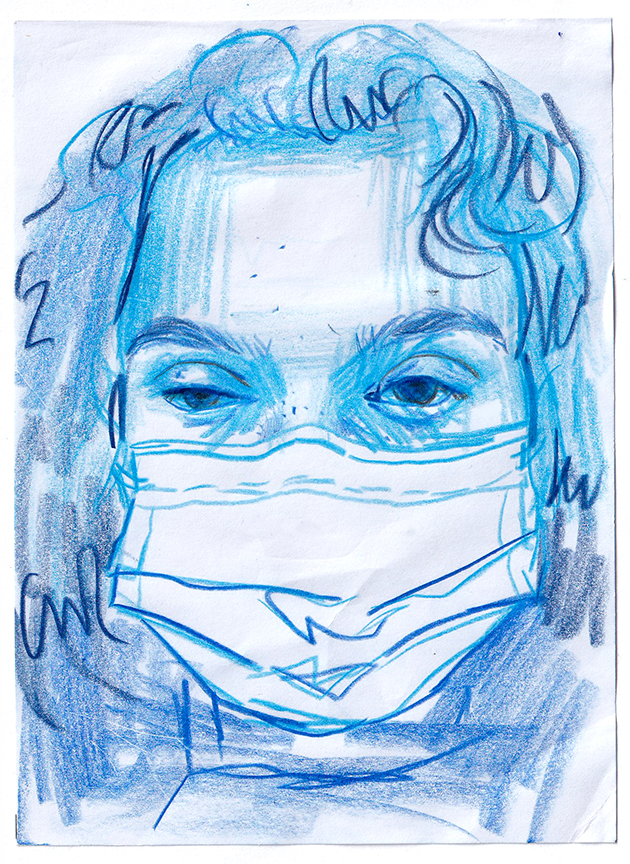 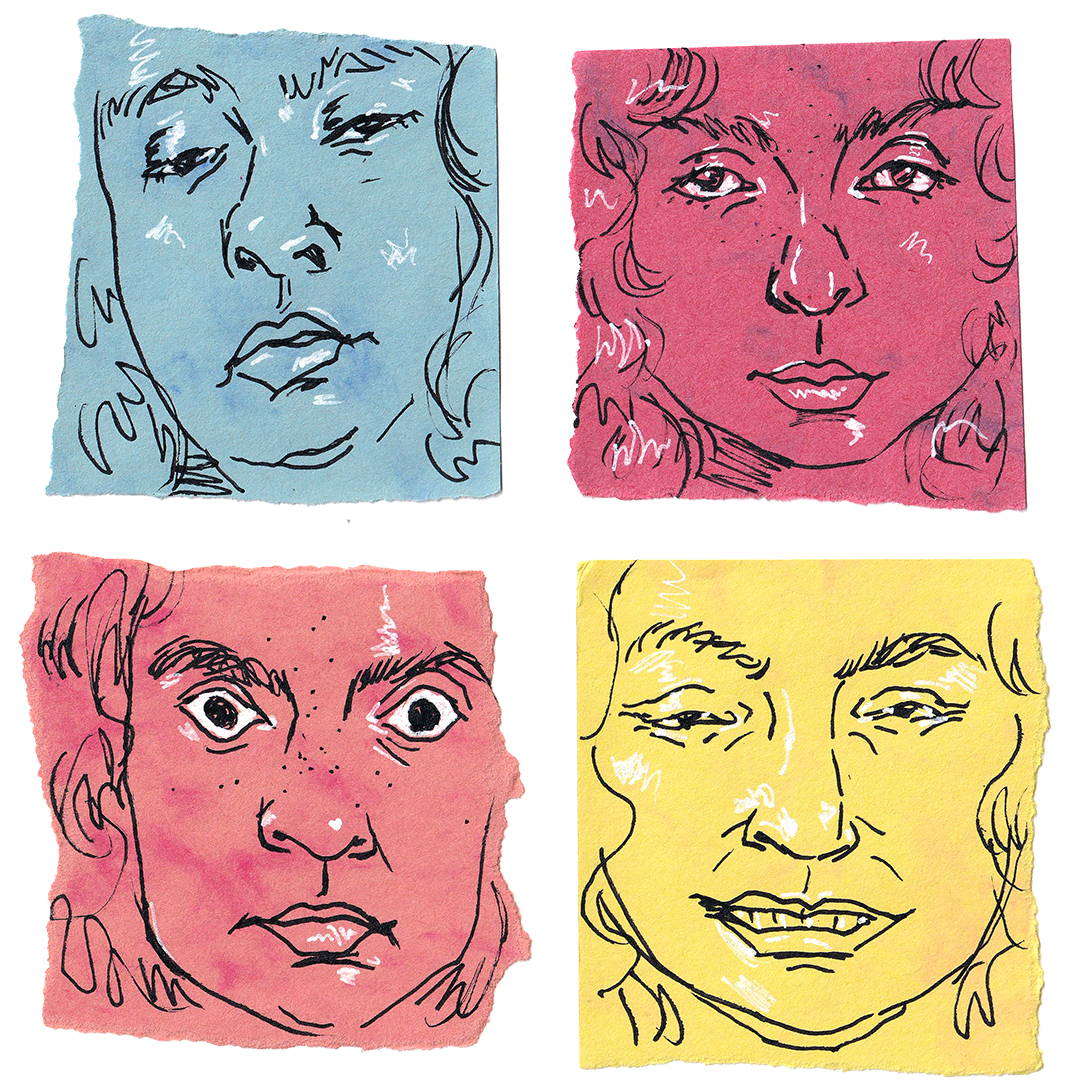 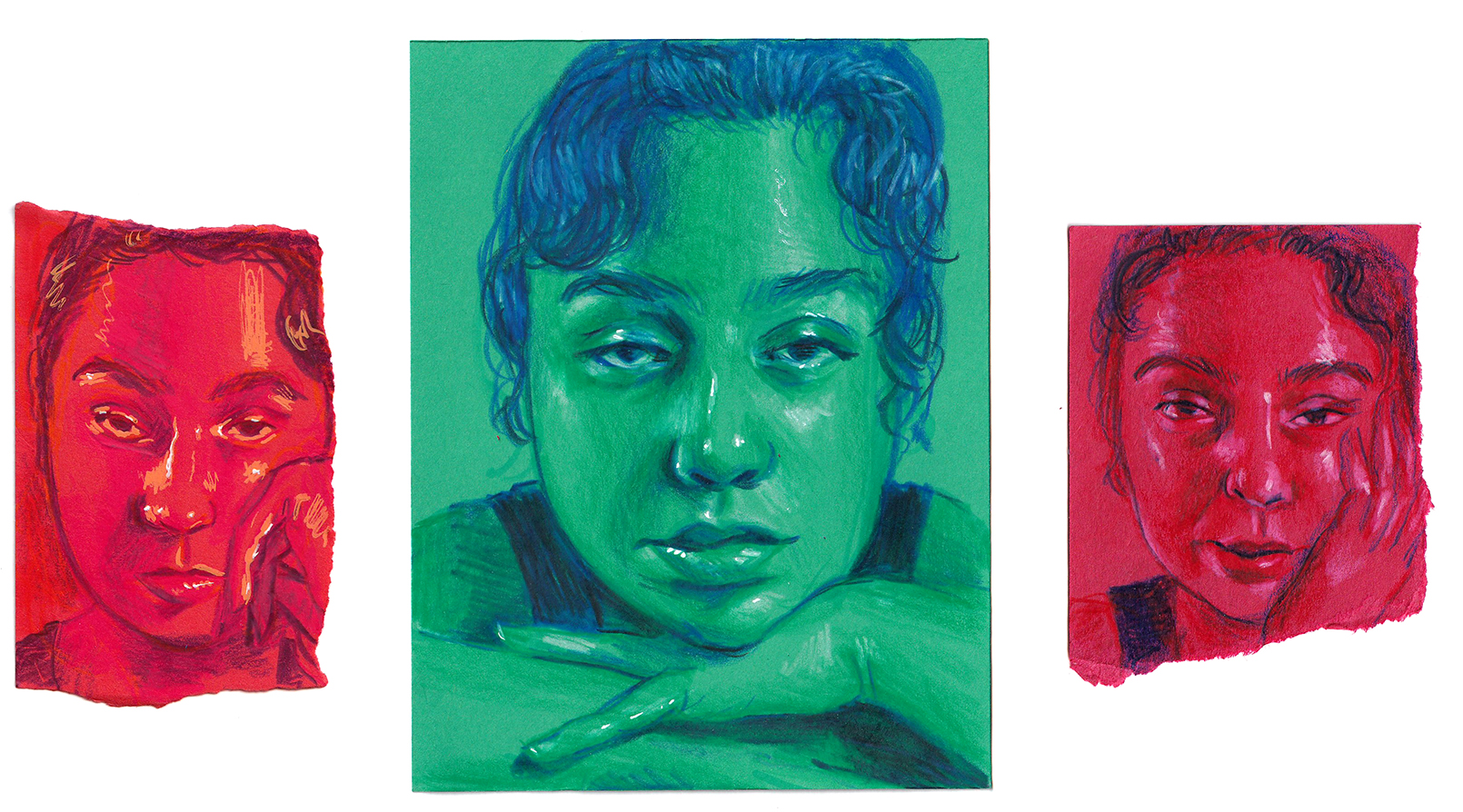 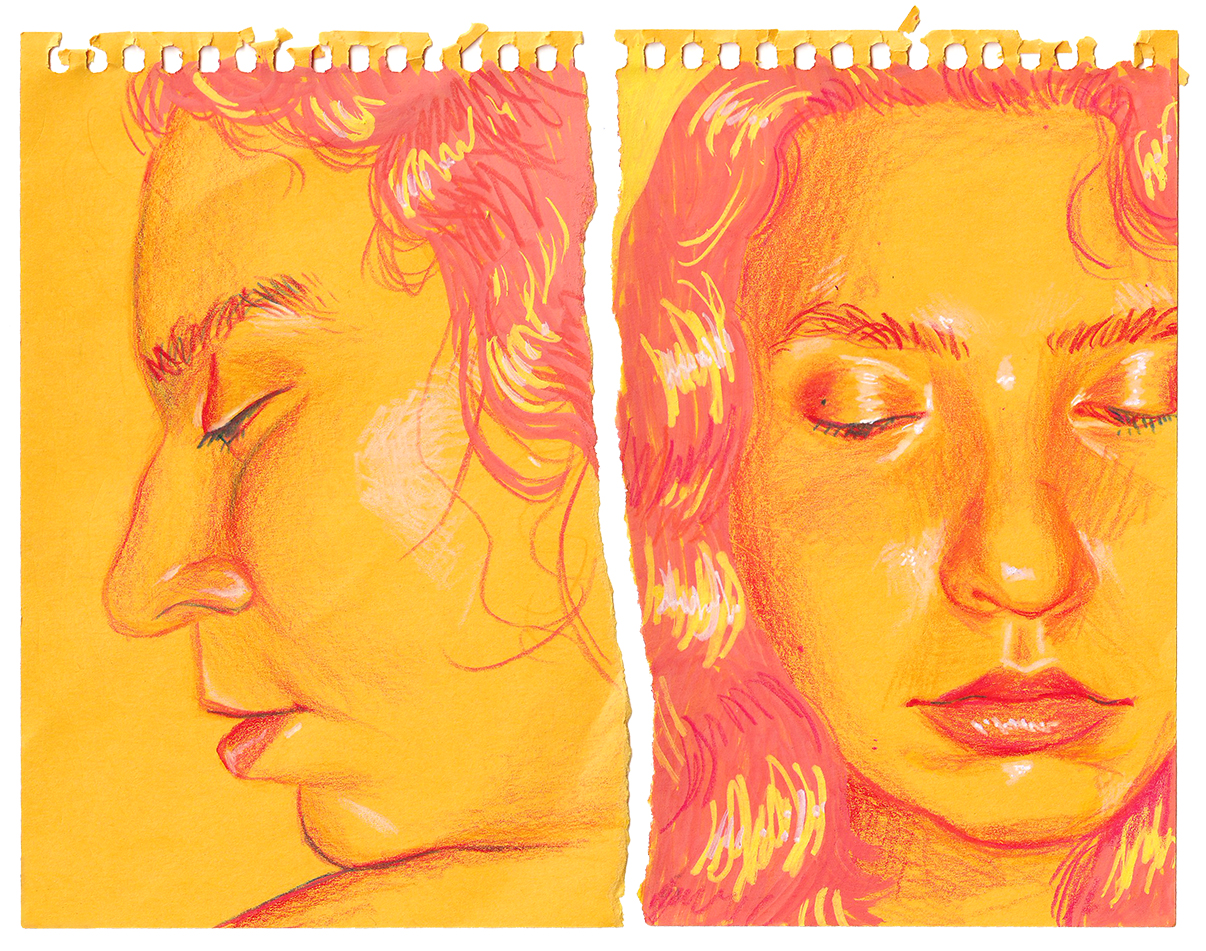 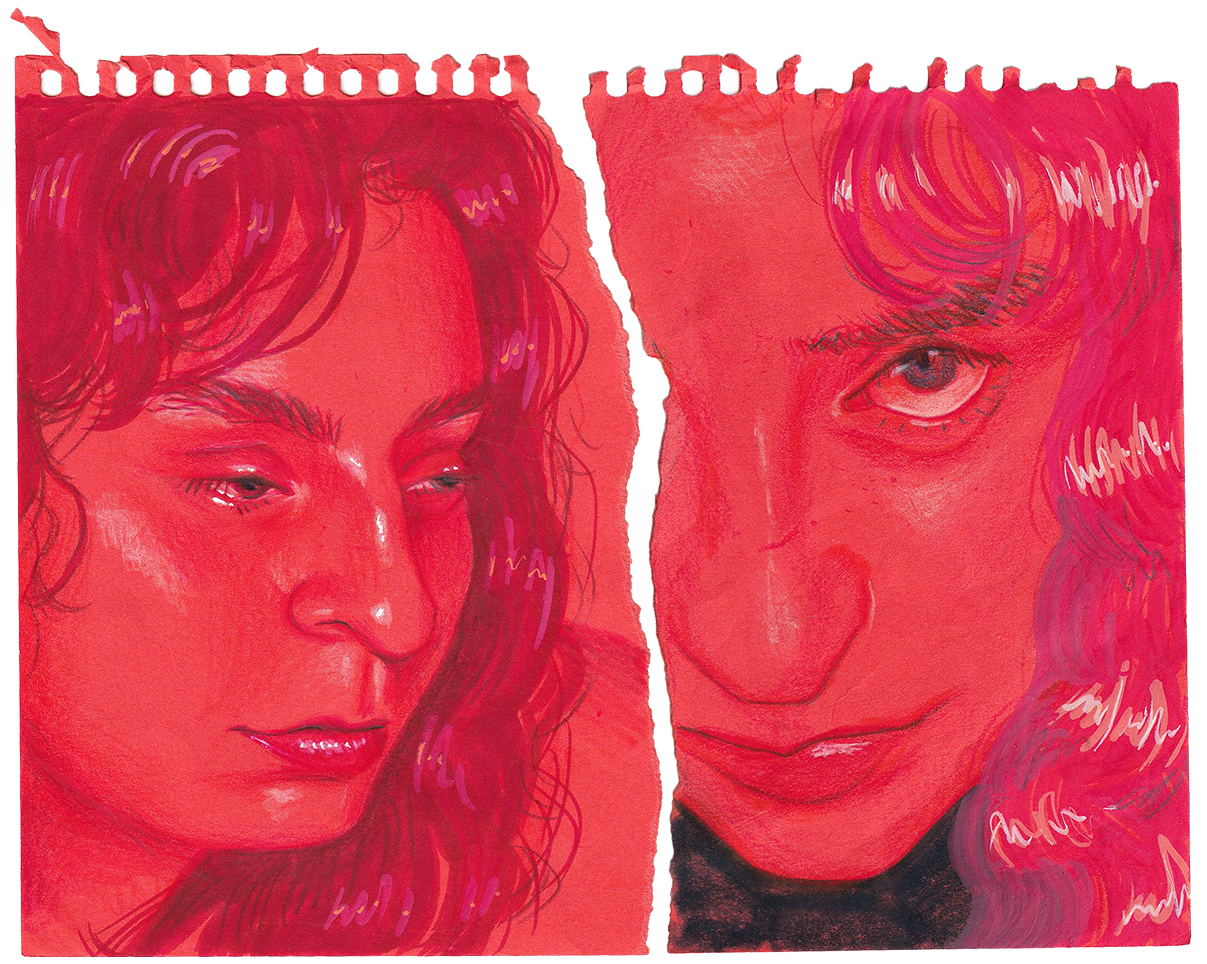 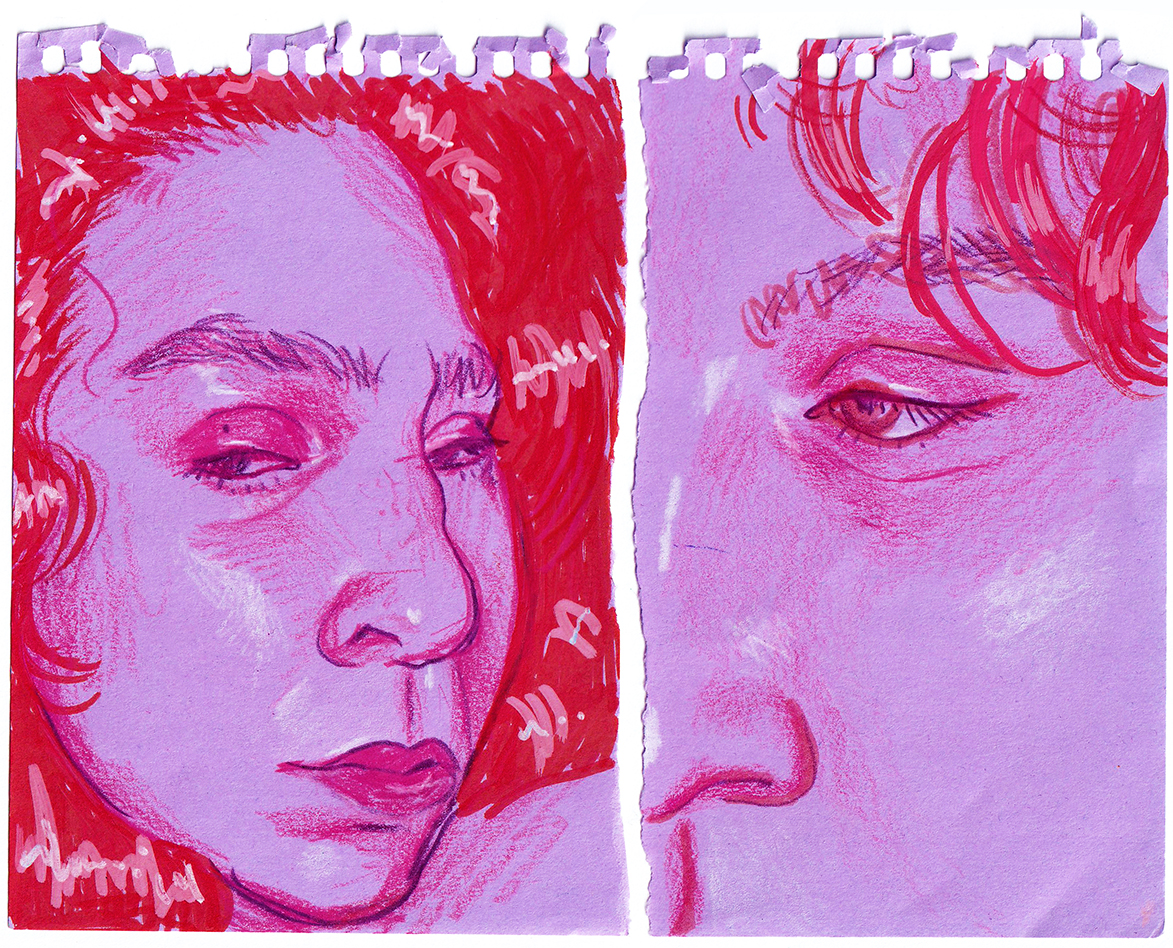 An unplucked eyebrow, an unwaxed upper lip and unpolished toenails. Natural, normal and nothing to be ashamed of, and yet, sources of embarrassment.
‍
I confronted this kind of embarrassment in this mini-series of 6” by 6” oil paintings. 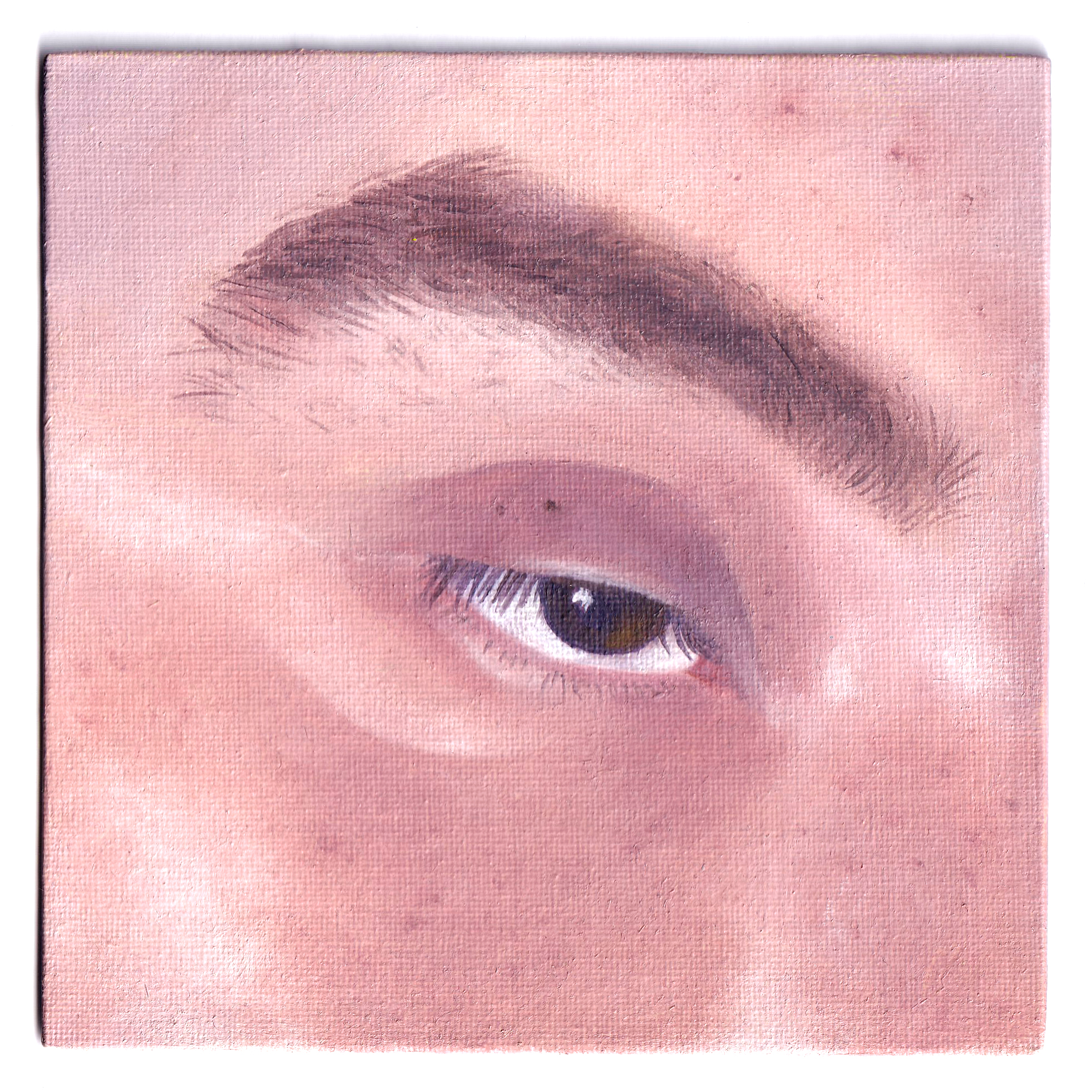 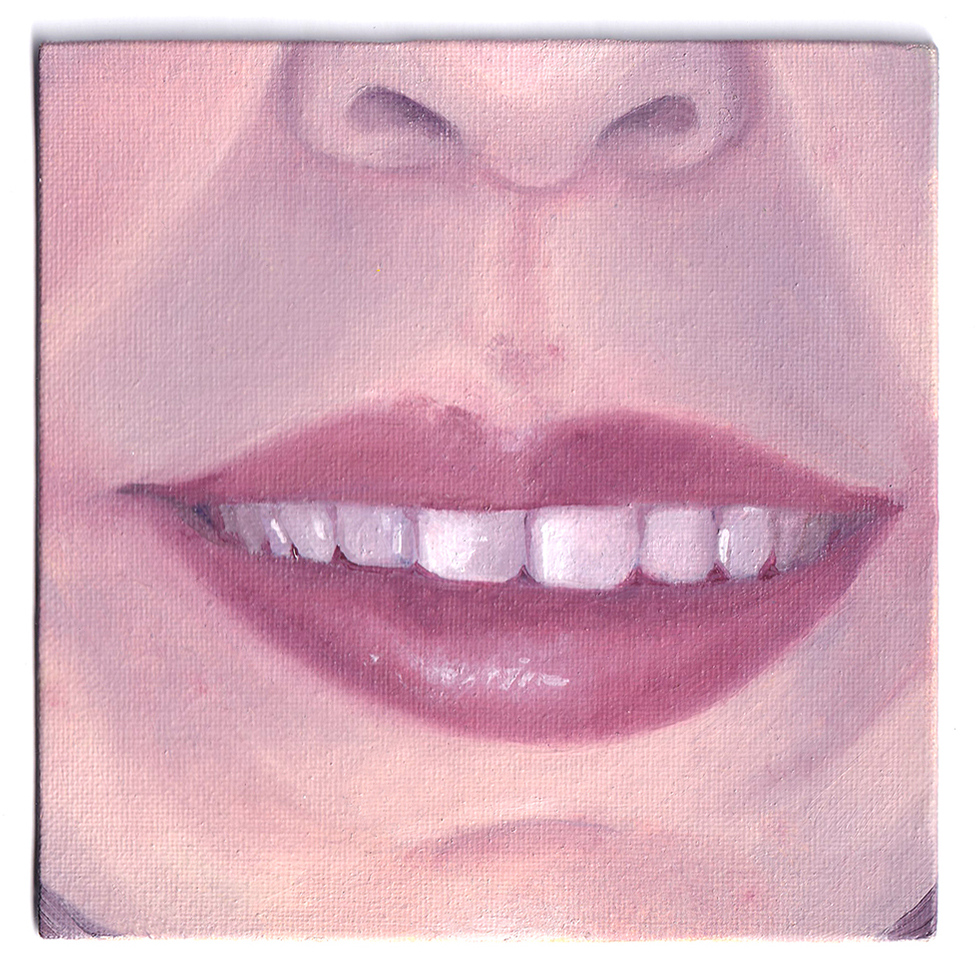 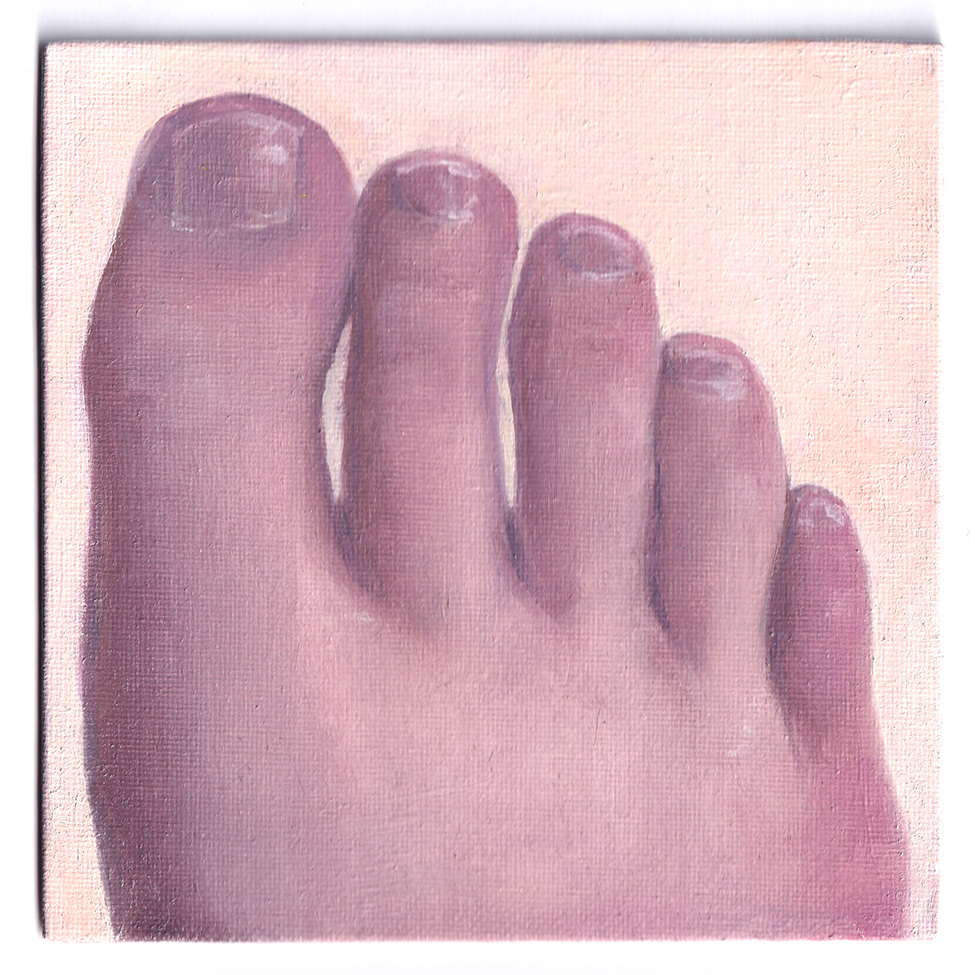 What a difference 6 months can make, and I don't just mean artistic progress. I’m talking about my relationship with myself.
‍
When I began this process I was simply trudging through life and ignoring myself.
‍
Now, I take better care of myself. I do what makes me happy, and I approach the day as my own, no longer as a series of draining obligations. I am more comfortable not only in my skin but in solitude.
‍
Perhaps most importantly, I allow myself to look in the mirror without turning away.
‍
This is me.